The Essential Guide to Bike Locks

The following is brought to you in association with our friends at Halfords. Don’t forget that ParkLife members can receive 15% off the price of new accessories, including locks, at a Halfords store.

If you’ve just bought a top of the range bike, or just don’t fancy leaving your mode of transport open to thieves, then a bike lock is a cheap and easy way of making sure nobody makes off with your wheels. There are plenty of different options available, so here’s our guide to choosing the right lock to keep your bike safe and secure.

How do bike locks work?

Different bike locks do different jobs, but most commonly they help to deter thieves from attempting to steal bikes in a couple of ways:

Immobilise
The easiest way to make off with someone’s bike is to jump on and pedal it away. If you’ve got a bike lock that feeds through the wheels and stops the bike from moving, then it makes it harder for someone to ride off on it!

Fasten
By securing your bike to an immovable object, thieves will have a hard time simply picking it up and taking it away.

In most cases, a bike lock will fasten around the bike (either through the frame or through both the frame and wheels) and then lock in place, using either a combination lock that is locked and unlocked with a number code set by the users, or a conventional lock that uses a key.
You can then fasten the lock to a lamppost, bike rack, railing or even a bench – just make sure the whole bike and lock can’t be lifted over whatever it is you’re fastening it to!

Which is the best bike lock?

There isn’t a right answer to this question, as different types of bike lock all provide varying levels of security for various scenarios. The thing to look out for, however, is the security rating and ensuring its right for your bike use.

Generally, bike locks will come with a security rating and usually a Sold Secure rating. Products with the Sold Secure rating have been tested externally by Sold Secure and then given bronze, silver or gold rating based on how well they performed under various tests. These tests are carried out annually and determine how well the product protects against tampering or intentional damage, and are based on the time it takes for the lock to be removed using hand tools and eventually power tools.

It’s important to note that no lock, no matter how secure, is 100% thief-proof. Locks will only ever act as a deterrent to a committed thief but the tougher the lock, the stronger the deterrent.

As one of the most popular bike lock variants, D locks use a strong curved tube of steel that can be slotted between wheel spokes or around the bike frame and then hooked to a bike rack, railing or secure unit. A locked bar is then added to each end of the tube to keep it in place, with either a key or combination code.
Most D locks come with a frame that can be attached to your bike so you can easily ride with your D lock without having to carry a bag around.

Chain locks use a set of heavy duty chain links with locking mechanisms at each end to keep it in place. Again, the chain can be fed through the bike frame or around the wheel and then fastened around a bike rack (or alternative).
The bonus of a chain lock is that it can easily be wrapped around your bike frame whilst you ride, making it much easier to transport.

Using a specially twisted steel cable, these locks work in exactly the same way as a chain lock, but are much lighter and more flexible, potentially being wound through both the frame and wheels before securing to a bike rack (or alternative).
Historically, they aren’t as secure as other bike locks but can be used in addition to a D lock to deter thieves even further, or used to secure your accessories to a bike.

If you park your bike in your garden shed or garage, then an anchor lock may be a good solution. Using a heavy duty ring that fastens to a wall or even into the ground, cyclists can then feed shackles or a chain around their bike frame or wheels to moor it in one place.

Look out for CCTV or security staff
When choosing a location to store your bike, try to make sure there are cameras or other forms of security. A thief will be less likely to target an area that’s being watched.

Lock your bike with other bikes
Dedicated bike parking areas or bike racks are more likely to deter thieves, thanks to the increased chance of someone turning up just as they’re attempting to get your bike!

Register your bike
Make life easier for the authorities if your bike does get stolen by adding it to BikeRegister. This police database makes it very hard for thieves to sell on your bike and helps to reunite you with your bike should it be found. Marking up your bike with a registration number and a warning label also puts thieved off taking your bike. 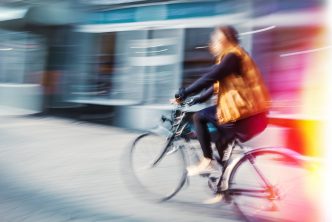 Setting Up A Cycle To Work Scheme 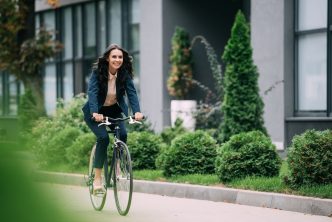 The Benefits of an Active Commute 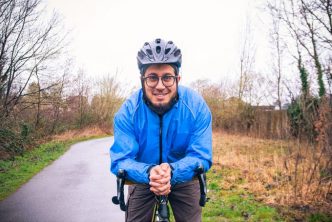 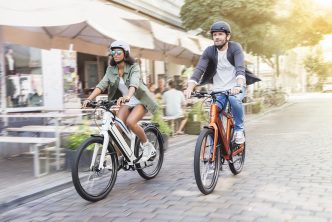 e-Bikes: Try Before You Buy

If you have any questions about your commute to Thorpe Park Leeds, we are here to help.